Angie never misses an UNC men's basketball game (Go Heels!). Her hobbies include trying to cuddle Justin, doing the dishes, sweeping up pet hair, (has been tricked into) watching Doctor Who and video games. She also enjoys shopping for Coach purses, shoes, clearance sales and paint.

In her spare time, Angie enjoys crafting and spending time with Justin and Ryan.

Ryan loves OSU football and has learned to love UNC men's basketball as much as Angie. He has learned the ways of the Force and his dream 'car' is a TARDIS. His hobbies include razzing on Justin, cleaning out litter boxes, taking out the trash, watching Doctor Who and playing video games. Ryan begrudgingly enjoys shopping for Coach purses, shoes, clearance sales and paint (with Angie).

In his spare time, Ryan practices bird law and enjoys painting. He also believes he is a world class chef (thanks to a customized chef jacket Angie bought him for his birthday).

You could say that Ryan tricked Angie to go out to eat with him for dinner back in September 2014 at which point they stayed up until 7am the next morning listening to music, going on an adventure to a park to swing and looking up at the stars.

"I love you so much. We have been through so much together and you have always been so supportive. I would like to spend the rest of my life with you as my wife. Will you marry me?"

Fast forward to December 2016. Ryan bought University of North Carolina Men's Basketball tickets for Angie as a Christmas present. It was a nice little trip to North Carolina to ring in the new year. After an 86-78 win for the UNC Men's Basketball Team over Georgia Tech, they went on an adventure to look around Chapel Hill. Upon visiting the "Old Well" on campus, Ryan had found the perfect time and place to propose. Making it even more special was a random couple and their child who offered to take their picture and had no idea what they were about to witness. For those wondering, Angie said "Yes!". 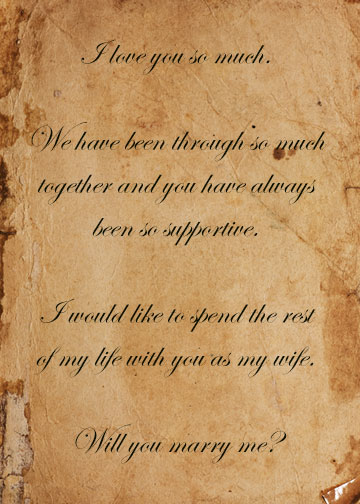